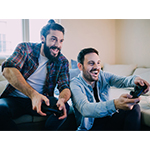 About 65% or more than 164 million adults in the United States play video games, according to a new video game demographics report from the Entertainment Software Association (ESA). And while the stereotype of a video game player may be an anti-social nerd, the report suggests that image is a false one.

The report notes that three-quarters of all Americans have at least one video game player in their household. Additionally, nearly half of the 93% of American households that own a smartphone use it, in part, to play video games.

More than three-quarters (79%) of those surveyed said that video games provide them with mental stimulation (79%) and relaxation and stress relief (78%).

The survey also found that:

“This is the golden age of video games. They are the leading form of entertainment in American culture. They enhance our interconnected experiences and relationships with one another and redefine the intersection between humans and technology,” said Pierre-Louis, ESA acting president and CEO, in a prepared statement.  “Americans play video games to have fun, relieve stress, learn, and spend time with family. This innovative form of entertainment touches on every part of society and improves how we play, work and live.”

A few other findings from the survey: