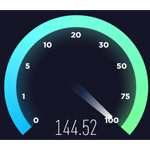 Minneapolis has the fastest mobile internet in the U.S., while the slowest among the top 100 were : Laredo, Anchorage, Madison, Reno and Lubbock, according to the latest mobile speed rankings from Ookla, a mobile and broadband network testing firm.

In grabbing the top spot, the Twin Cities surpassed Fort Wayne, Ind., which was followed by San Francisco and Irvine, Calif.

The company’s speed test report also found that T-Mobile is the country’s fastest carrier, though it trails Verizon in “metropolitan hotspots.” Verizon was fastest in 45 of the 100 cities and Washington, D.C., while T-Mobile had the top spot in 33, AT&T in 12 and Sprint, five.

Mobile Speed Rankings
T-Mobile was tops in mobile speed rankings in rural areas, while Sprint was the slowest. The report also showed that consumers in these areas may find themselves having to choose between speed and coverage.

Ookla analyzed more than 2.8 million test results on its Speedtest application during the first two quarters of the year, in Q1 and Q2 of this year. When analyzing fastest carriers, Ookla considers all carriers with 3% or more of total test samples in the market for the period. Fastest carrier is determined using a proprietary Speed Score, combining a measure of each carrier’s download and upload speed to rank network speed performance.

“We’re seeing unprecedented change in this country’s – and the world’s – approach to mobile,” said Ookla general manager and co-founder Doug Suttles, in a prepared statement. “As we have in years past, we can see the impacts shaping consumers’ mobile experience and, given the prevalence of the devices in our day-to-day lives, these impacts do not go unnoticed. With the race to 5G, ongoing legislative debate around network neutrality, and the landmark mergers of Sprint and T-Mobile and AT&T and Time Warner, the evolution in the consumer’s experience (and its extracted data) over the next few years will be fascinating.”