Home » Report Shows U.S. Ahead on Freeing Up Spectrum

In the last year or so we’ve been hearing more and more about an impending spectrum shortage, with some network operators and the FCC saying demand threatens to outpace spectrum availability – a situation that has arisen as a result of burgeoning mobile data growth. But according to a report issued this week by the FCC, the U.S. is ahead of at least eight other large countries in freeing up licensed spectrum for mobile broadband use — and depending how much spectrum is freed up in the impending voluntary auction of broadcast spectrum and through repurposing spectrum from or sharing it with government users, the U.S. could lead the pack.

The report also found the U.S. ahead of Europe in freeing up unlicensed spectrum for mobile broadband use.

According to the report, titled “The Mobile Broadband Spectrum Challenge: International Comparisons,” the U.S. has at least 663 MHz of licensed spectrum available or in the pipeline for mobile broadband. That includes 608 MHz of spectrum currently available for mobile broadband use, with at least another 55 MHz in the pipeline, not counting spectrum that will be freed up through the broadcast spectrum auction or federal repurposing. 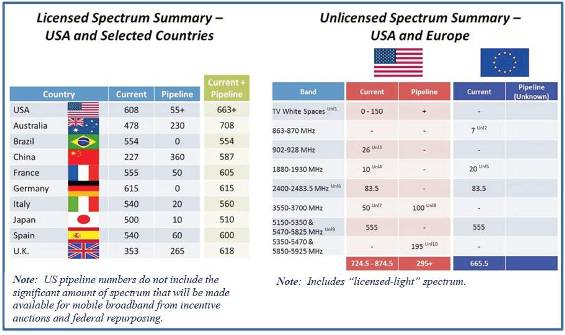 The only country that currently has more spectrum available is Germany, which has 615 MHz available currently but has none in the pipeline.

Australia, meanwhile, has just 478 MHz available today but has another 230 MHz in the pipeline for a total of 708 MHz.

Other countries studied include Brazil, China, France, Germany, Italy, Japan, Spain and the United Kingdom. All of these countries had at least 500 MHz available or in the pipeline, with several having more than 600 MHz.

On the unlicensed side, the U.S. has between 724.5 and 874.5 MHz currently available for mobile broadband. The variation depends on how much TV white spaces spectrum is vacant in a particular area. In addition the U.S. has at least 295 MHz of unlicensed spectrum in the pipeline.

In comparison, Europe has 665.5 MHz of unlicensed spectrum available and none in the pipeline.

The report defined spectrum as “available” if providers have legal authority to build networks and provide mobile service even if those networks have not yet been built out or spectrum has not yet been cleared. Spectrum was considered to be in the pipeline if the government has plans to make the spectrum available to providers within the next three years.

The report also looks at the degree to which various countries have made available the same or similar spectrum blocks for mobile broadband use and finds considerable commonalities.