A new visual online database of global gigabit deployments illustrates just how fast the number of gigabit Internet initiatives in the U.S. and worldwide has grown in recent years. A new Global Gigabit Monitor launched today reveals that more than 500 gigabit Internet projects are operational or in the planning stages around the world. The interactive database comes from Viavi Solutions, a provider of monitoring software and hardware.

Most have been launched in the past two years, Viavi highlights in a news release. Generally speaking, gigabit Internet services are capable of transporting digital data 159 times faster than the global average of 6.3 Mbps, Viavi points out.

Global Gigabit Deployments
According to Global Gigabit Monitor there are at least 350 live wired or wireless global gigabit deployments. Another 164 have been announced or are under construction. Technologies being used include GPON, DOCSIS 3.1, G.fast, LTE-A, 5G and 802.11ac.

More gigabit Internet deployments have been announced in North America than any other world region, according to Viavi’s visual online database. Collectively, regional gigabit deployments account for 61 percent of the global total. Europe comes in second with 24 percent. The remaining 15 percent are distributed across Asia, Australasia, Middle East, Africa and South America. 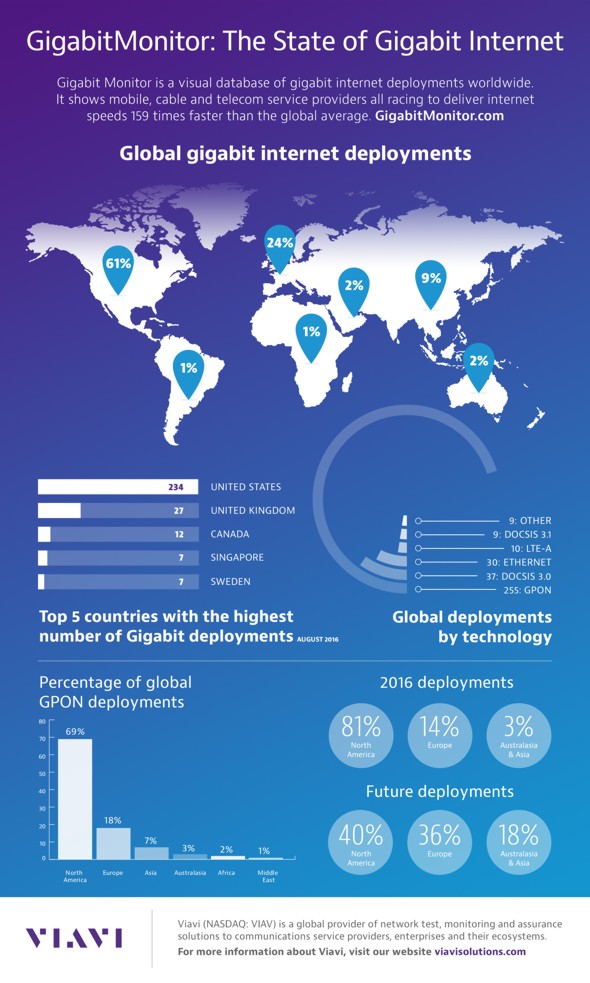 Using Gigabit Monitor’s interactive online tools, users zoom in and search for gigabit Internet services from the regional to local level. Results can be filtered by technology as well as geography. The interactive tool also shows whether a service is Announced, Under Construction, on Trial or in Commercial service.

Viavi will update Gigabit Monitor regularly. Users can submit new or corrected information via an online form as well.

“There are more than 20 billion connected devices and that number is continually increasing. For the consumer, there are obvious benefits. For society as a whole, research also shows that widely available broadband can be a driver for growth and jobs. And with a 100-fold increase in speed, service providers will need to ensure that their ecosystems are ready for the massive network evolution required to deliver the customer experience they envision.”