Let the Netflix debate continue! A report from network performance vendor Sandvine reveals that Netflix traffic accounts for 30% of all peak download Internet traffic in North America. That’s one source representing close to one third of all download traffic. Pretty amazing.

Sandvine’s “Global Internet Phenomena Report: Spring 2011” points out that ‘Real-Time Entertainment’ applications, represented most prominently by Netflix, now represent 50% of all peak download traffic, a 60% increase since 2009. The data highlights the dominant role entertainment now play’s on the Internet. If you believe Sandvine’s numbers, entertainment will be closer to 60% of all peak download Internet traffic by the end of this year.

These numbers help fuel the debate around issues like broadband metering and caps, net neutrality, and who ultimately pays for the massive amounts of bandwidth entertainment applications like Netflix now demand. Peer-to-peer file sharing runs a distant second to entertainment and social media is inconsequential, when put into the context of entertainment demand. 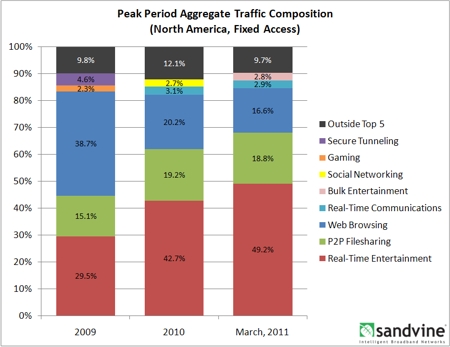 Some consumer advocates suggest the issue is overblown and broadband carriers are creating illusions of ‘scarcity’ to justify higher prices and better profits for broadband access. Like with any argument, there are elements of truth on all sides. Often times, all broadband carriers, regardless of size and scope, get lumped in together with this argument, which in my opinion is a mistake. Large national tier one carriers like Comcast and AT&T have very different exposure to this issue than a rural broadband carrier that has 2,000 total broadband subs with a 10 meg pipe to the Internet.

Whatever the argument, the implications caused by the growing demand of consumers to be entertained via the Internet are far and wide, with no logical conclusion in sight.