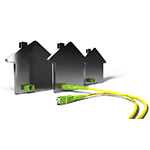 The markets and technologies which will drive continued rapid broadband growth over the next decade are outlined by Broadband Forum and Point Topic in a new report.

According to the research, the current trends of booming deep-fiber deployment and accelerating broadband penetration in developing markets will be the engine of broadband growth through 2025. The forecast states that some variant of fiber – Fiber-To-The-Home (FTTH), Fiber-To-The-Premises (FTTP) or Fiber-To-The-Building (FTTB) – will be used by 59% of fixed broadband subscribers globally by 2025. The report also examines the impact of superfast 5G, predicting that fixed-mobile convergence will mean that the next one billion subscribers could blend wireless and fixed subscriptions.

The report further predicts that 89% of the expected 1.2 billion subscribers in 2025 will come from the current top 30 broadband markets. The adoption rates of fixed broadband is expected to grow by nearly a quarter (22%) in these markets. The developing economies in Indonesia, Thailand and Mexico are likely to see the highest growth in this period. Global adoption – which has a lower base and therefore can grow more easily on a percentage basis — will grow by 24%, according to the report.

“With 5G on the horizon and new Internet of Things devices and Over the Top services increasingly becoming a part of subscribers’ everyday lives, this new analysis looks at how the fixed broadband market and the technologies within it are evolving to meet this demand,” said Oliver Johnson, Point Topic CEO, in a prepared statement. “As we look towards the next billion broadband subscriptions, fixed lines will continue to play a significant role. We expect to see more convergence between fixed and mobile lines as consumers look for a seamless, high-quality connectivity experience that is available anywhere, anytime.”