More than one half of all video consumed in U.S. broadband households is seen on television sets, according to a new video viewing report from Parks Associates.

“Understanding consumers is key to driving acquisition and minimizing churn among video services,” Steve Nason, Parks’ Senior Analyst, said in a press release. Different demographics show markedly different attitudes and preferences. Net promoter scores (NPSs) for Netflix are higher among women, while NPSs for premium OTT services such as Starz, Showtime, and HBO Now are higher among men, he noted.

Video Viewing Report
“Younger video consumers represent the future of the industry, but their programming and platform preferences are distinct from older segments, which puts traditional pay-TV providers in a difficult position,” continued Nason. “Changing the traditional pay-TV service model could alienate older, high-ARPU customers, but not changing could doom future prospects.” 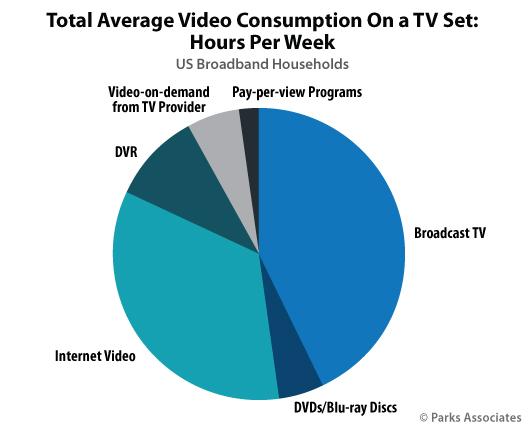 The video viewing report found that more than 25% of broadband households find local broadcast channels to be the most enjoyable. That is far more than any other type of programming. The press release points out that sports and local broadcasting, which “have long anchored” traditional pay TV packages, are migrating online.

Other key findings of the video viewing report.

The migration of programming to broadband dovetails with Parks’ finding earlier this year that 77% of smart TVs are connected to the Internet. That’s a 15% increase since 2014. The same study found that more than 70% of broadband households own at least one streaming entertainment device.