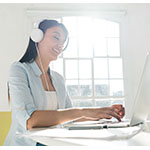 The COVID-19 crisis has led to a sharp rise in broadband consumption during business hours, which jumped by 41% in the week since the Center for Disease Control declared the virus to be a pandemic, according to a new report from OpenVault, a developer of broadband data usage measurement technology. Overall broadband usage in March is on track to outpace the previous monthly record, researchers said.

The pandemic has driven a massive uptick in people working from home, relying on broadband networks serving individual homes rather than enterprise networks. OpenVault’s data finds:

Business Hours Broadband Consumption
Based on the current rate of growth, OpenVault projected that consumption for March will reach nearly 400 GB per subscriber, an increase of almost 11% over the previous monthly record of 361 GB, established in January of this year.

“Broadband clearly is keeping the hearts of business, education and entertainment beating during this crisis,” said Mark Trudeau, CEO and founder of OpenVault, in a prepared statement. “Networks built for peak-hours consumption so far are easily handling the rise in nine-to-five business-hours usage. We’ve had concerns about peak hours consumption given the increase in streaming entertainment and the trend toward temporary cessation of bandwidth caps, but operator networks seem to be handling the additional traffic without impacting customer experiences.”

Temporary cessation of bandwidth caps is just one way service providers are attempting to ensure that consumers can work at home during the crisis. In addition nearly 400 service providers have now signed the Keep Americans Connected pledge, which includes commitments such as not cutting off customers who are late on paying bills during the crisis.