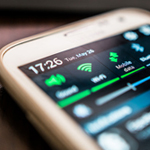 Average Mobile Download Speeds
Thirteen U.S. cities are seeing particularly high average mobile download speeds from at least from one network operator, according to OpenSignal. Verizon averaged speeds above 30 Mbps in eight cities, while T-Mobile did so in four cities and AT&T did so in two.

Unsurprisingly, average upload speeds were considerably lower than average download speeds – and there was a large gap between the best and worst operator’s performance. Verizon had the highest average upload speed, at 7 Mbps, followed by T-Mobile at 6.7 Mbps, AT&T at 4.6 Mbps and Sprint at 2.4 Mbps.

Fitchard notes, though, that Sprint’s lower upload speed may be by design. The company’s TD-LTE network technology gives the company the ability to “take upstream capacity and allocate it to downlink connections” which allows it to “boost average 4G download speeds by sacrificing upload speeds,” he explains.

By OpenSignal’s analysis, AT&T came out on top on network latency, averaging 57.8 milliseconds (ms) nationwide.  T-Mobile came in second at 60.6 ms, followed by Verizon at 62.6 ms and Sprint at 70 ms.

From a global perspective, these are not great numbers, according to Fitchard. The report notes that in many other countries, operators are pushing LTE latencies down to the 30 ms level.