The firm says that the top three companies on the list—AT&T, Hughes and Verizon— were unchanged from the previous Leaderboard. The changes are that CenturyLink moved up to the fourth position, Windstream dropped to fifth and Fusion moved from the Leaderboard to the Challenge Tier.

Five companies were in the Challenge Tier. These companies controlled between 1% and 2% of the market. In alphabetical order, they are Fusion, GTT, Masergy, Meriplex and TPx.

The year was solid, though the path ahead is unclear. “The U.S.-managed SD-WAN market expanded rapidly in 2019 as backlogged orders from the prior year were fulfilled by key service providers,” Rick Malone, principal of Vertical Systems Group, said in a press release. “While the duration and depth of the coronavirus economic collapse is unknown, we expect resiliency across bandwidth intensive VPN markets, but acute vulnerability for the SD-WAN networks supporting the retail and travel verticals.” 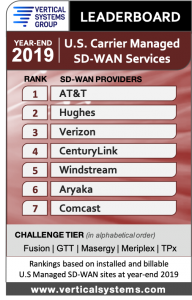 VSG last looked at the SD-WAN sector in May 2019. The Leaderboard, which looked at year-end 2018 results, was comprised of AT&T, Hughes, Verizon, Windstream, CenturyLink, Aryaka, Fusion and Comcast.