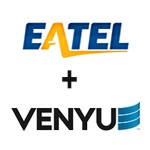 The latest example of independent telcos leveraging cloud and managed services momentum comes from Louisiana based EATEL, with their announced acquisition of Baton Rouge, La based Venyu. Offering data center, managed hosting, cloud, virtualization, and data protection solutions, Venyu will become a wholly owned subsidiary of the regional independent operating company. Terms of the transaction were not disclosed.

“The acquisition of Venyu positions EATEL within the rapidly growing cloud-based business services, data center, and hosting markets. Venyu’s success in the Gulf South coupled with our expanding fiber network and corporate footprint will provide both entities with new growth opportunities,” said John Scanlan, President and Vice Chairman at EATEL in a press release.

Venyu was formed in 1989 and has data center operations in Baton Rouge and Shreveport-Bossier, La. With the transaction, Venyu will retain its existing management team and headquarters. Venyu has approximately 75 employees.  They cite specialization in offsite backup and claim to be “…one of the first service providers in the U.S. to leverage virtualization for disaster recovery.”

Like their larger regional and national telecom carrier brethren, independents are also recognizing the need to expand into faster growing enterprise and cloud based service offerings, especially as legacy services continue their decline.