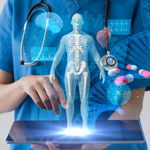 Wireless equipment provider Samsung expects the International Telecommunications Union to begin work on defining the next generation of wireless technology to be known as 6G in 2021. But the company already has some ideas of its own about what 6G should look like.

Samsung visionaries see the technology supporting peak speeds of 1,000 Gbps, and they see service being deployed in the terahertz (THz) band, which is even higher frequency than the multi-gigahertz (GHz) millimeter wave bands that are being pioneered for 5G.

Samsung put forth its 6G vision in a 40-page white paper released yesterday, which also anticipates that 6G networks, devices, and the entire 6G ecosystem will be developed more “holistically” and will be developed from the get-go to use artificial intelligence for a range of functions, including network optimization.

“Considering AI from the initial phase of developing concepts and technologies for 6G will give us more opportunities to take advantage of AI for improvement of overall network operation in terms of performance, cost, and ability to provide various services,” the authors wrote.

The Samsung visionaries also see 6G being used, in large part, to support machine connectivity – a requirement that will drive the need for even lower latency than 5G is designed to eventually support.

And considering that mobile peak speeds of 1,000 Gbps would exceed those of today’s fastest landline residential broadband connections, one might also ask what these speeds will be used for.

Samsung’s recommendation to use the terahertz band for 6G is driven by the need for wide swaths of spectrum to support the high speeds that are envisioned. The authors note, for example, that the FCC last year opened spectrum between 95 GHz and 3,000 GHz for experimental use and unlicensed applications to encourage development of new wireless communications technologies.

The Samsung white paper includes a chart comparing the capabilities that the company envisions for 6G in comparison with 5G. The authors also note a need for enhanced security driven by the expectation that 6G would make greater use of open radio access network (O-RAN) and related technologies.

This post has been updated to attribute the white paper to Samsung.