Home » Podcast » Multi Gig on the Rise, Wi-Fi in Your Blood?, and the Hot Mess of Broadband Maps. 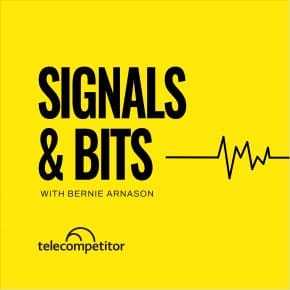 Signals & Bits
Multi Gig on the Rise, Wi-Fi in Your Blood?, and the Hot Mess of Broadband Maps.

Hello, friends, and welcome to the latest edition of “Signals & Bits”. Bernie Arnason here, and it’s been a busy past few weeks, and I’ve missed my regular rotation for “Signals & Bits”, but excited to be back at it right now. As always, thanks for listening. Now, let’s get after it.

So I wanted to start off today talking about multi-gigabit service, or just multi-gig. That is offering multi-gig service of two, five, or even 10-gigabit-per-second speed tiers. If you haven’t heard, it’s gaining some steam. It’s hard to believe that it’s been over a decade since one-gigabit service began to find its way into the mainstream conversation. And it was kind of pushed there by Google Fiber. Google announced its ISP intentions back in 2012, making gigabit service its mainstay. Now at the time, many believe this to be a publicity stunt of sorts and kind of shrugged it off, thinking no customer needs a gig of service, or will need one anytime soon, if ever. Fast forward 10 years now, Google Fiber is currently in 15 cities, and recently announced expansion plans for four more states. The company’s CEO also announced a new multi-gig strategy that will eventually have the company offering 100-gig service. Yes, 100, with two zeros, of gigabit service to the home. It’s got a field test running in Kansas City right now, delivering 20 gigs. Now, this multi-gig strategy goes way beyond Google Fiber though many ISPs, large and small, are already offering multi-gig service with two and five-gig probably the most popular. Most of this multi-gig service is from fiber providers, but cable companies like Comcast have multi-gig service as well, but at least on the downstream, with a path in place to get to symmetrical multi-gig service using DOCSIS 4.0. Comcast just announced their path to DOCSIS 4.0, which will begin in late 2023.

Of course, all of this leads to the familiar rumblings that we heard that decade ago. No one needs multi-gig service today, if ever, right? Well, here’s what we do know. Roughly 15% of all households now subscribe to a gig or more, a number that has nearly tripled in the span of two years. And with a few ISPs, I’ve seen some numbers that show over 50% of new subscribers are opting for gigabit service. So the momentum for Gigabit is here, and it’s accelerating. Now, is there an element of marketing hype for multi-gig? Of course there is. Do customers need multi-gig? Well, the answer is no, at least for the average customer, but it’s kind of an irrelevant question in my view. The trend in computing and technology is always faster and always bigger. Always has been, always will be. Broadband is no different. You better believe one day soon, we’re gonna be screaming, “No customer needs a hundred gigs to the home. That’s crazy.” When will it ever stop? Can you say N-E-V-E-R?

All right, let’s move on to the digress part of “Signals & Bits”. After all, I love broadband better than anybody, but sometimes, you gotta expand your horizons, or as my wife would say, “Get a life.” This observation fits in “That’s Incredible” category. Like many of you, I’m a dog owner, and we all kind of know that dogs have some special powers. They can make you laugh and make you cry and make you yell, sometimes in the span of five minutes. But they also, as many of us who have dogs have witnessed, well, they can sense when you’re stressed out or sad, and it often appears, will try their hardest to cheer you up. Well, a new scientific study from Queens University in Belfast, Ireland suggests this is absolutely true, and it may have something to do with their incredible sense of smell. Apparently, us humans, when we’re stressed, or sad, we secrete an odor coming from our breath and sweat, an odor that dogs can apparently pick up on, but we humans can’t really sense. They argue this might also be why dogs can sense sickness in humans including, COVID-19. So that’s kind of incredible. Well, sort of. I mean, if you really want to impress me, pooch, how about smelling some odor secreting from me that tells you to take your butt outside and poop, rather than messing up my clean carpet. Now that would be incredible.

Back to broadband. So unless you’ve been living under a rock for the past few months, you’ve no doubt heard about the new broadband mapping process underway at the FCC. The agency is trying to develop accurate maps that plot where quality broadband exists, and where it doesn’t. This is of extreme heightened importance because the maps will be the basis of choosing locations for broadband funding under the NTIAB program, which has close to $43 billion to distribute through the states. It’s a complex and convoluted process, and I don’t envy the FCC for having to undertake it. The agency has already released its first version, and as I like to call it, it’s a bit of a hot mess. Now, my goal here is to not finger point. I think most of us in this industry knew this was gonna take a Herculean effort to get right. Honestly, I’m not sure it could ever get right, given the ISP market environment here in the US and the telecom public policy that we’ve utilized for the past 50 years. But here we are. Large errors are already emerging. We would no doubt hear about these extreme cases. Some locations pointing to the middle of a swamp as having broadband access, for example. But as some have pointed out, the process has to be played out, and specifically the challenge process has to be played out to get to the accuracy we all want. That process involves ISPs and governmental agencies challenging the FCC data to refute and prove that broadband is either already available in a given location that is shown not to have service, or the opposite. Broadband service is not available despite the FCC data saying that it is. That challenge process to the initial broadband fabric data as it is called, is now underway. The challenge is the burden of proof is now up to those ISPs and to local community organizations and governments, many of whom lack the time and resource to adequately take this challenge on. But let’s give it a chance, and let’s see what happens.

Before I get to broadband news hits, one other thing I learned this week that’s a bit baffling to me. It seems there’s no place wifi can’t go these days, including within your blood cells. Well, sort of. Researchers at MIT Media Lab had managed to develop a wireless antenna small enough to be inserted within a living human cell. Seems impossible, right? I mean, isn’t a human cell as small as small can get? We’re talking about micro-micro-millimeter to the 10th power here. But yes, apparently some nerds at MIT have made it happen. They call the technology a cell rover. It’s an antenna that’s about 5% the size of a human cell. It’s designed to explore the fundamentals of biology for medical research purposes. It can be used to detect and monitor biochemical and electrical changes associated with diseases like cancer. It can also monitor the reactions within cells to new drugs in real-time. Cell Rover will help enable what they call intracellular computing, as in of the human cell kind, not the cellular phone kind. I mean, it’s amazing what some nerds can come up with given the time and the money. I mean, who would’ve ever thought of wifi for your blood cells? It kind of sounds like a bad plot for a Netflix science fiction movie.

Okay, let’s run with broadband news hits of the past couple of weeks. Bipartisan legislation was just introduced in the Senate that exempts broadband grant money received by ISPs of any taxation, and that’s a big deal worth following. Still has to pass though. The cable industry held their annual tech event last week, the SCTE Cable-Tec Expo, where much of the discussion was on the transition of DOCSIS 4.0 and 10G for cable providers. I also hear there was a lot of discussion around cable companies moving from hybrid fiber-coax to fiber broadband. Gigabit-fixed wireless plans for a couple of RDOF winners are now coming into view, with Tarana Wireless gear, a popular solution for RDOF-winning WISPs. The Department of Agriculture announced more ReConnect funding winners, doling out $502 million last week to providers across 20 states. Verizon continues to deploy its own fiber to its cell towers, announcing that it will serve 50% of its towers with its own fiber by the end of this year. OpenVault released its latest quarterly OVBI, revealing that FCC Affordable Connectivity plan recipients are using significantly more bandwidth than the average consumer. Over 160 gigabytes more data each month on average. Starlink appealed its RDOF rejection, seeking reinstatement of nearly a billion dollars in funding support for rural broadband. And Google Fiber announced Omaha, Nebraska as its next expansion market.

Well, folks, that’s a wrap for this edition of “Signals & Bits”. Thanks so much for listening, and I’d love to hear your feedback, good or bad. Drop me a line bernie@telecompetitor.com. Look for new episodes every few weeks or so, and use it to get caught up with the most important developments in broadband, plus my snarky observations on a bunch of other stuff too. Thanks again, and as always, check us out telecompetitor.com. Take care, everyone.