Home » Podcast » FCC ‘Speed’ Standards, Rural Attracts National Providers, and a Robot Might Be Your Next Dentist 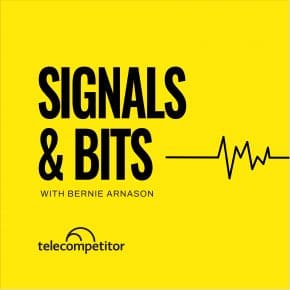 Signals & Bits
FCC ‘Speed’ Standards, Rural Attracts National Providers, and a Robot Might Be Your Next Dentist

Welcome to Signals & Bits, a podcast where Bernie Arnason, Editor in Chief of Telecompetitor, breaks down some of the most important news coming out of the broadband industry. We’ll keep it short and to the point. Let’s dive in.

Hello, friends, and welcome to the latest edition of Signals & Bits, Bernie Arnason here, and thanks so much for listening. Thankful for you and thankful for being a part of the broadband industry. So let’s just dive in.

So a pretty consequential thing happened late last week in our industry, or maybe not. I’m talking about a Notice of Inquiry that the FCC Chair, Jessica Rosenworcel, began circulating at the FCC. And it’s about the official broadband standard as defined by the FCC. Now that current standard is 25 megabits downstream and 3 megabits upstream. A bit of a joke, right? I think we all realize that’s painfully slow in today’s standards. For example, Ookla, the market analytics firm and operator of the ubiquitous Speedtest platform, just put out a report here a couple of days ago saying the average download speed in the U.S. is 225 megabits per second, and the average upload speed is 89 megabits.

Now, Rosenworcel is pushing for a new 100 megabits down, 20 megabits up standard. These FCC standards are used in official reporting of national broadband progress to Congress by the FCC, and they’re also used as benchmarks for some FCC funding programs.

What other federal programs have long since ignored this antiquated number? For example, the B Program by the NTIA and the Department of Commerce, that program is pushing for a minimum 100 megabits download, and the Treasury’s Capital Funds Program is pushing for symmetrical 100 megabits per second. So the FCC standard is pretty much irrelevant outside of the cubicles of the FCC, and many argue that the new standard isn’t forward-looking enough with one gigabit often cited as the standard we should be pushing for.

So even after my bit of a rant here, maybe this FCC Notice of Inquiry really isn’t consequential at all, given just about everyone else has ignored this standard for years. I mean this whole exercise is kind of equivalent to let’s say the transportation department came out and said, we want to officially raise the speed limit from 55 miles per hour to 60 miles per hour. But dude, people are averaging 70 miles per hour with one flat tire and a broken tailpipe. Let’s get with the program here. We averaged 225 megs right now, and they want to make the standard 100 megs. Honestly, I just don’t get it.

So let me digress for a minute here. As I like to do on Signals & Bits. Something has me really excited. I read recently about some encouraging news about robots. Now let me just say, I’m normally not a fan of the whole robots thing. I tend to fear they’ll eventually turn on us humans at some point, but this, well this has to happen. Engineers at the University of Pennsylvania are working on tiny robots. They call them microbots that will get this, floss and brush your teeth for you. For real. Floss and brush your teeth. You just sit there and the microbots do their thing. I mean, could there possibly be a better invention of robots? I highly doubt it. Now to top it off, they can also kill all the bacteria in your mouth. I mean, they had me at the flossing piece, but kill bacteria too. I’m officially sold. No word on when this will become commercially available, but you better bet I’ll be the first in line.

Now back to broadband. There’s an interesting competitive development that’s flying a bit under the radar, at least from my perspective. And that’s the growing interest from a large national cable broadband players like Comcast and Charter, to expand their presence in rural markets. And it’s fueled primarily by government funding. Now, if you’re a loyal listener of Signals & Bits, you know I’ve been covering some of the various broadband funding programs out there, from ARPA to BEAD to the Capital Projects Fund all the way to RDOF, and with many programs in between. I mean, it’s basically reigning money on the broadband industry these days. And the cable industry increasingly sees it as an opportunity.

Charter is the most aggressive. They’ve committed billions of dollars to expand their rural reach with over $1 billion of that coming from the first round of the RDOF Program. Charter CEO, Tom Rutledge is not shying away from these rural moves. On its second quarter earnings conference call this year, Rutledge said, and I quote, “our construction is not limited to RDOF commitments. We continue to build in other rural areas and are pursuing opportunities to receive other broadband stimulus funds.”

Now that stance is evidenced by Charter going state by state and winning additional funding to that RDOF money. The company took in $50 million from Kentucky last month, and just recently won six out of the 12 grants issued by North Carolina in its latest rural broadband expansion funding round. Now maybe Charter’s cable cousin Comcast is beginning to take notice, because they are getting in on the game too. West Virginia just announced its latest round of funding for rural broadband. And guess who took home two thirds of the total funding for that round? Comcast did, who will use $14 million in grant money to expand its rural reach throughout the panhandle region of West Virginia.

Now I have to say, I didn’t see this coming, not like this. Charter and Comcast looking to grow their rural presence. Charter says it intends to add a 100,000 miles of fiber across its rural markets in the next five years. With most of the funding for rural broadband yet to be allocated, it makes you wonder how far wide and deep these cable conglomerates intend to go?

So I have my normal list of broadband news hits coming up here in a second, but I’d like to share this amazing story with you first. This is one of those things that you never really think about until you read a crazy story that makes you go, hmm. Now stick with me on this one. It’s long been believed that human beings were the only mammals on the planet that undertook farming to create a food supply for themselves. Again, never really thought about that, but yeah, it makes perfect sense. That is until now.

It seems like we humans are no longer alone when it comes to farming. Scientists have uncovered that a species of pocket gophers who live underground in North and Central America are actually farming. They’re growing a specific form of roots that makes up somewhere between 20% to 60% of their food supply. Now these smart little critters even spread their own feces as fertilizer and actually harvest these roots for eating later. I know, sounds crazy, right. What’s crazier to me is who in the hell lived underground for a while, observing these gophers and came up with this theory? I mean, there’s got to be a better way to make a living.

Okay. Let’s run with broadband news hits of the past couple of weeks. The FCC opened up the reporting mechanism for its new broadband maps initiative, formally known as the FCC Broadband Data Collection System. Data from this new platform will be used to determine unserved and underserved locations for the purpose of the $42 billion BEAD Program and others. Now speaking of BEAD, all 50 states and most U.S. territories are now on board with this program and we’ll await next steps. Brightspeed, the company that intends to take over former CenturyLink properties from a sale from Lumen is busy announcing its fiber build plans with announcements on seven states so far. The new company says it will eventually pass over 1 million locations with fiber by the end of 2023.

82 carriers including the big three mobile carriers, have all signed up to participate in the latest FCC auction for wireless spectrum, Auction 108. This auction is auctioning off spectrum in the two and a half gigahertz band and it will begin in late July. The NTIA began accepting applications for the $1 billion Middle Mile Funding Program. Now RDOF authorizations continue, but five of the top 10 winning bidders have yet to receive any funding. And it increasingly looks like they may never receive funding. That includes companies like SpaceX’s Starlink and LTD Broadband. Now the FCC is mandating that carriers rip out and replace Chinese made Huawei equipment on their network because of national security concerns.

But unfortunately for those carriers, the funding for that mandate only offers 39% of the cost to do so so far. Well folks, that’s a wrap for this edition of Signals & Bits. Thanks so much for listening and I’d love to hear your feedback good or bad. Drop me a line at bernie@telecompetitor.com. Look for new episodes every couple of weeks or so, and use it to get caught up with the most important developments in broadband, plus my snarky observations on a bunch of other stuff too. Thanks again. And as always check us out at telecompetitor.com. Take care, everyone.