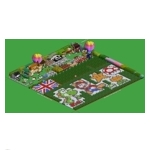 The social gaming market will grow five times its size in 2010 by 2015 driven mainly by growing ad sales and sales of virtual items, according to Parks Associates. Revenues exceeded $1 billion in 2010, according to Parks’ “Social Gaming: Market Updates.”

“Gaming on social networks has quickly become the most visible category of online games,” said Pietro Macchiarella, Parks research analyst. “Right now more than 250 million people play games like Zynga’s CityVille and FarmVille on Facebook every month, and both game developers and marketers have taken notice. Big brands such as McDonald’s and 7-Eleven have carried out cross-promotions with existing social games.”

Game developers are increasingly able to monetize virtual items that enhance the game experience and a player’s competitive edge, according to Macchiarella. “The most powerful asset of social game developers is the quantity of behavioral data that they can obtain from their games,” he explained. “The abilities to measure the efficacy of different gameplay mechanisms, to tweak game design in near-real time, and to test new models are advantages that traditional gaming companies will never have. Zynga’s huge market share is the best proof of the competitive advantage made possible by properly leveraging consumer data.”