Home » Parks: OTT Viewing Migrating to the Largest Screen in the Home

OTT viewing is increasingly taking place in the living room, with more than half (52%) of U.S. broadband households now watching online video on an internet-connected television, according to a new report from Parks Associates.

Additionally, more than half (55%) of U.S. broadband households indicated that among their top favorite leisure activities is watching movies or television at home.

Among other findings from the Parks Associates research: 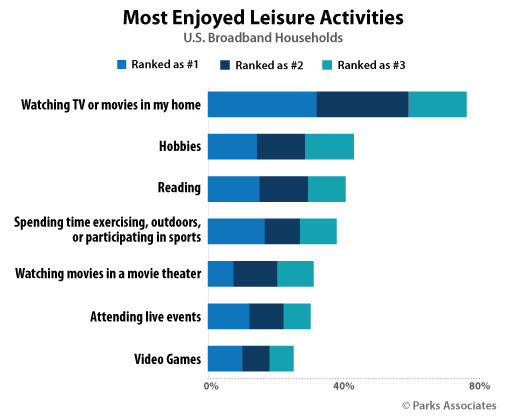 “While the total number of hours consuming videos has declined, consumers are watching more internet video on the largest screen available,” said Parks Associates research analyst Billy Nayden, in a prepared statement. “The number of hours consumers report watching video on a TV increased for the first time since 2014, with connected devices enabling internet video services on TV and shifting consumers away from PC and mobile viewing. As OTT competition becomes a battle for the living room, the challenge for device makers and content producers is finding the correct product mix to maximize both profit and utility.”

Nayden added: “As consumers’ taste for OTT experimentation wanes, they will start to resist the push to add another monthly subscription to their households. Many providers are starting to lead with freemium and ad-based models, in anticipation of this pushback.”