Video streaming has grown significantly during the COVID-19 pandemic, gaining a foothold in about 6 million new households since the first quarter of last year, according to Parks Associates and streaming guide provider Reelgood.

The firms say that 76% of U.S. broadband households now have service. The report – which assessed the status of 10,000 heads of U.S. households between March 8 and April 3 – found that 12% of households are taking online pay-TV services such as YouTube TV and Hulu with Live TV.

“We are closely tracking shifts in technology use at home, as shelter-in-place orders have continued as a result of COVID-19,” Parks Associates’ Research Director Steve Nason said in a press release. “Consumers are experimenting with watching videos on different services and different devices. We anticipate a number of changes to occur, including higher consumption combined with reduced spending per month on services, which could boost ad-based services, as well as shifts in what content consumers are watching.” 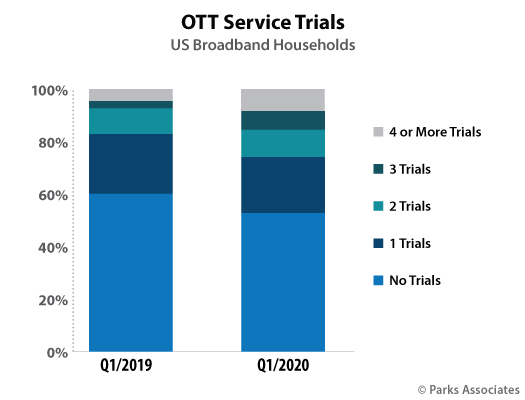 The COVID-19 crisis is providing streaming and other content providers with the opportunity to help the public cope – and, in the process, display their wares. Amazon Prime, AT&T, CBS, Charter, Comcast, Sling TV, Verizon and perhaps others are providing free content and extended trials to subscribers.