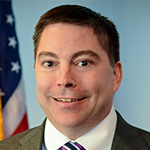 FCC Commissioner Michael O’Rielly said yesterday that he doesn’t expect the planned auction of mid-band spectrum in the CBRS band to occur until around this time next year. He attributed the delay in the CBRS auction date, in part, to a delay in the auction of millimeter wave spectrum in the 37/39/47 GHz bands. Software development also is contributing to the delay, along with “technical-sounding excuses,” he said.

“I frankly don’t see a way that [the CBRS auction] could happen before second quarter 2020,” said O’Rielly, who has been heavily focused on freeing up spectrum in the CBRS band for commercial wireless usage. He added that the time frame was “just not soon enough” and that “procrastination must end, and the auction must be scheduled.”

O’Rielly made his comments at a CBRS Alliance meeting in Charlotte, N.C.

More Mid-Band Spectrum
The CBRS band includes spectrum between 3.55 and 3.7 GHz, which is considered “mid-band” spectrum. Some people consider mid-band spectrum to represent the optimal tradeoff between the long range of lower-frequency spectrum and the high bandwidth and capacity of higher-frequency spectrum.

Just how much bandwidth the mid-band can support also depends on how much spectrum within the band is available to a commercial operator. And in his address, O’Rielly also expressed frustration about how long it was taking to free up additional mid-band spectrum beyond the CBRS band.

He pointed a finger at the National Telecommunications and Information Administration and the Department of Defense regarding a 100-MHz block between 3.45 and 3.55 GHz.

The block, he said, “is needed so that, combined with CBRS and C-band spectrum, the large channel sizes needed to optimize 5G services can be created.”

According to O’Rielly, the original schedule called for this spectrum block to be made available for commercial use quickly but “NTIA and DOD erroneously shifted course and opted for a feasibility study.”

That study is unnecessary and should be concluded as soon as possible, he said, arguing that “this backtracking . . . puts American wireless competitiveness in jeopardy.”

O’Rielly avoided providing any details about plans for the C-band, the future of which has been the subject of considerable controversy. That band includes spectrum between 3.7 and 4.2 GHz and is currently used, in large part, for satellite distribution of video content. Satellite operators that hold licenses for the spectrum want to sell the spectrum, which they say would put the spectrum in operators’ hands more quickly. Opponents want the FCC to auction the spectrum, arguing that the satellite operators don’t own the spectrum and therefore shouldn’t be allowed to sell it.

O’Rielly hinted that the commission might be coming close to a resolution, however, referencing “some . . . specific details” that remain to be resolved.

He also advocated reallocating additional spectrum between 3.1 and 3.45 GHz, arguing that the bands are “desperately needed” to “realize the true benefits of 5G.”