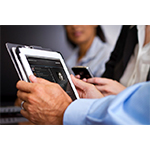 The digital divide – the difference in access between disadvantaged groups and others, is closing, according to findings from the National Telecommunications and Information Administration’s (NTIA) recent survey about internet use demographics.

Internet Use Demographics
According to the survey, 78% of Americans ages 3 and older used the Internet as of November 2017, compared with 75% two years earlier. NTIA credits increased Internet usage by low-income families, seniors, African Americans, Hispanics, and other groups that had been less likely to go online for the increase.

Older consumers are also increasing their use of the internet, NTIA found. About 63% of those 65 and older said they used the Internet, compared to only 56% in 2015.

As many people turn to a range of different computing tools to accomplish different tasks, however, some groups are using fewer devices than others. People in higher income households are more likely to use multiple types of devices. Americans reporting family incomes below $25,000 per year on average used 1.34 different types of devices, while those with incomes of $100,000 or more used an average of 2.77 types of devices—more than twice as many.

The NTIA survey was conducted as a supplement to the Census Bureau’s Current Population Survey (CPS). NTIA surveyed over 123,000 people living in more than 52,000 households in 50 states and the District of Columbia. NTIA has sponsored the CPS Computer and Internet Use Supplement 14 times since 1994.