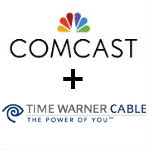 “The proposed merger of Comcast and Time Warner Cable threatens competition, innovation and consumer choice,” says a coalition webpage. “We represent businesses that compete and do business with Comcast and Time Warner Cable and we are calling on the FCC to deny this merger – and prevent Comcast from doing to the Internet what it has done to cable TV.”

Don’t Comcast the Internet Campaign
On the web page, the coalition argues that the merger would:

The website also includes several anti-merger filings from the coalition participants and others, along with interactive tools to enable website visitors to voice their opposition by sending a tweet to the FCC or an email to a member of Congress.

Comcast and Time Warner argue that the merger would not be anti-competitive because the companies operate in separate territories without overlap. But a bigger concern to other pay TV providers is that Comcast also has a content business and content prices already have been climbing, with many smaller service providers arguing that larger providers get better deals on content.