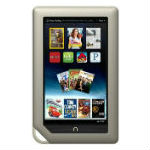 Barnes and Noble (B&N) is expanding their scope by launching a new OTT video service, NOOK Video. The branding comes from B&N’s NOOK tablet line, which competes directly with the Amazon Kindle tablet family and the Google Nexus 7, in the 7 inch tablet arena. You could make the argument that it also competes with the market leading iPad, but indirectly so. With the move, B&N hopes to catch up with all of their competitors, who already have extensive OTT video assets.

NOOK Video, which launches this Fall, will offer TV and movie content from a variety of sources, including HBO, Sony Pictures Home Entertainment, STARZ, Viacom and Warner Bros. Entertainment, and The Walt Disney Studios. B&N promises more content options will be coming soon. The OTT offer will be featured on NOOK tablets, but also will be available across a variety of devices including TV’s, other tablets, and smartphones through a NOOK Video app. B&N says both SD and HD titles will be available, but hasn’t yet revealed any pricing  or business model details. Will this be a subscription service like Netflix or Amazon Prime, or a VOD-only offer like Vudu or Apple’s iTunes?

The offer will leverage the NOOK Cloud, a digital media locker of sorts, that’s aligned with the UltraViolet initiative. UltraViolet allows customers to buy a video, say a physical DVD, and gain access to that video in the cloud for playback on multiple devices. Moving video to the cloud theoretically allows consumers to do interesting things, like pause or stop video on one device, then pick up watching it where they left off on an entirely different device.

NOOK Video enters an already crowded OTT video space, challenging B&N to grab sustainable market share. It helps that they have an embedded base of customers and a retail footprint, but a significant challenge will remain. Like Wal-Mart, which also owns an OTT video offer with Vudu, B&N historically has sold significant physical media video in the form of DVDs. By expanding their scope to OTT video, they hope to adapt to a changing marketplace that increasingly chooses digital media over physical discs.