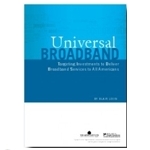 The Aspen Institute this week released a proposal for expanding broadband access across the U.S. drafted by Blair Levin, who joined the non-profit organization earlier this year after leading the team that crafted the National Broadband Plan. The proposal, found in a report titled “Universal Broadband- Targeting Investments to Deliver Broadband Services to All Americans,” aims to make broadband available to 99% of the U.S. population within 10 years.

If this sounds familiar, that’s because it’s based on the same reforms to the Universal Service program recommended in the National Broadband Plan. As in that plan, the new proposal recommends transitioning away from a voice-focused fund to one focused on broadband. It also would set a minimum broadband speed target of 4 Mb/s downstream and 1 Mb/s upstream—another recommendation carried over from the National Broadband Plan.

Other similarities include recommendations to phase out rate of return regulation, to phase out the competitive eligible telecommunications carrier program, and to distribute broadband funding based on a market-based mechanism such as a reverse auction.  Both proposals also call for the creation of a broadband mobility fund aimed at bringing all states to a minimum level of 3G service.

One notable difference between the two proposals. The National Broadband Plan said its recommendations could bring broadband to 99% of the US population within 10 years without new funding but that goals could be achieved more quickly if Congress would raise “a few billion dollars per year over two to three years” in additional funding. The new Aspen Institute report does not even suggest the idea of achieving universal broadband prior to 2020 and makes no request for additional funding—perhaps in recognition of today’s political realities.

The new paper also includes a few brand new ideas not previously mentioned in the National Broadband Plan. These include a proposal to set aside $100 million from the high-cost Universal Service program to be awarded to the provider in five areas who gains the greatest efficiencies in broadband adoption.

“This would take the form of a reverse auction in which a number of areas, far greater than five, are identified as eligible for the program,” wrote Levin in the report. “The winners of the grants will be those who guarantee the greatest increase in users for the least amount of money. Through such a market-based program, the country will learn which tactics are the most cost-effective for increasing broadband adoption.”

In addition the report recommends redirecting another $100 million from the high-cost fund to create a competitive program for sustainable economic development.

“The money would be awarded on a competitive basis, with grant applicants providing information on how many jobs the grant would create and the grants being awarded on the basis of the most jobs created per grant,” wrote Levin.