Home » NetZero, FreedomPop Up the Ante on Free Mobile Broadband 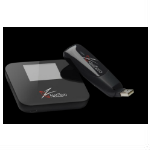 FreedomPop announced they will also use Sprint’s 4G LTE network to expand their footprint. “With LTE network coverage reaching critical mass, we are now able to offer our customers the fastest 4G service for free,” said Stephen Stokols, FreedomPop’s CEO in a press release. “We’re taking our free Internet model to the next level, giving customers unprecedented access to the best mobile network performance available.”

Both company’s strategy is to entice free users to upgrade to their paid plans, which include a $10/month plan for 500 MB and a $50/month plan for 4 GB for NetZero. FreedomPop offers a $20/month plan for 2GB and a $29/month plan for 4GB. NetZero plans are for mobile data only using USB modems for laptops and/or MiFi  for Wi-Fi connected devices. They currently don’t offer a smartphone option.

FreedomPop offers a variety of connectivity options in addition to mobile broadband plans similar to NetZero, including a fixed wireless plan for home broadband and a ‘free’ smartphone offer which is coming soon. They also market a ‘sleeve’ for the iPod touch that say turns an iPod into an iPhone.