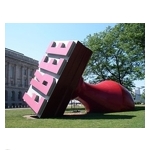 Boston-based startup netBlazr has a novel approach to broadband service delivery. Business users in Boston now can get service for free after paying an initial startup fee of $299 that includes a high-speed router and three WiFi radios. In addition to providing connectivity to a high-speed landline link to the Internet, the three radios help extend the broadband service to other potential business customers within line of sight.

“The goal is to have a customer on every block,” netBlazr CEO Jim Hanley told the Boston Herald this week. “Every new customer is three new windows that someone else could eventually see.”

Business users are cautioned not to rely solely on netBlazr, however. “netBlazr is designed to be an affordable source to boost your broadband Internet speed,” the company notes in an FAQ posted on its site.  “This way your company’s Internet needs are provided over two separate paths ensuring redundancy and additional bandwidth at a low cost.”

According to the Herald report, netBlazr’s origin signal comes from the top of a tall building “where netBlazr has negotiated with already existing fiber-optic-powered businesses to let them latch onto their network in exchange for giving the company free Internet access.” Also critical to service delivery is a high-speed landline from Cogent Communications referenced in netBlazr’s FAQ.

netBlazr expects to be profitable by offering a premium service that delivers higher capacity and committed data rates. “These paid services are still a small fraction of what other Internet service providers charge, but they are enough to cover the costs of our frugal business,” the netBlazr FAQ says.

The netBlazr business model would appear to have the greatest chance of success in densely populated urban areas. Currently service is available only in Boston’s Back Bay and downtown neighborhoods. But netBlazr apparently hopes to extend its coverage area moving forward. The company offers a wait list for people to be notified when service reaches their neighborhood.

Discouragingly, however, the Herald reporter notes that netBlazr currently has only eight connected customers, with another half dozen in the pipeline.

The company may have opted to focus on the business market because, as a blogger at StopTheCap.com notes, business users “don’t traditionally pound networks with peer-to-peer file requests or lots of online video.” But unless a business is fairly small, with decision-making concentrated in the hands of one or two people, I’m thinking netBlazr may have a tough sell in the business market simply because so many people have to agree to the idea. I can envision a lot of IT managers refusing to even consider the netBlazr option because of the added work of installing the router and radios and perceived risk for them.