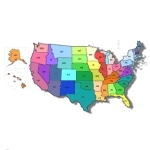 Up to $350 million was allocated in the original $7.2 billion broadband stimulus plan for broadband mapping. NTIA was tasked with this portion of the program and they report having “…awarded a total of $293 million to 56 grantees, one each from the 50 states, 5 territories, and the District of Columbia, or their designees.”  The initial results of this investment will be revealed, when the national broadband map is unveiled on February 17th.

The controversial Connected Nation built a specialty out of building these maps and won several state contracts. I say controversial because some critics argue that Connected Nation is too closely aligned with the broadband service providers for which their mapping projects are supposed to document and to some extent, scrutinize. Perhaps CN will be slightly vindicated though, because the National Journal is reporting the map “…is expected to prove embarrassing to some major telecom carriers, including AT&T and Verizon, because it will highlight rural communities in their service territories that have been left high and dry without broadband connectivity.”

6 thoughts on “National Broadband Map to be Unveiled February 17th”