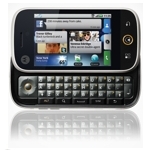 Looking to revive its fortunes in the mobile phone and handheld device marketplace, Motorola’s placed a big bet on Google’s Android operating system.  On Sept. 10, the company introduced MOTOBLUR, a mobile OS that automatically syncs contacts, posts, messages, photos, video and audio streams across diverse Web sources, including social networking sites such as Facebook, MySpace and Twitter, email services including Google’s Gmail, and digital entertainment sites, such as LastFM. Their first Android handset to feature MOTOBLUR is the new CLIQ, which will debut on T-Mobile’s network later this year.

MOTOBLUR’s introduction gives end users and industry analysts some insight into the reasons Motorola chose to bet heavily on Android, and the rationale underlying their Android-based business strategy.  Android’s purported capability to better access, organize and synchronize multiple synchronous and asynchronous digital content streams, and dovetail them with mobile handset applications is for Motorola, the key to a simpler, easier and more effective end user experience, and hence the solution’s success.

All conversation threads, friend updates, stories, links, photos and other content are automatically delivered to live widgets on the home screen with no need to open and close different applications or menus, the company explained.  Via the new Motorola CLIQ, users will also be able to tap into a an already large and still growing host of additional widgets and applications from MOTOBLUR, Android Market or pre-loaded Google mobile services.

“With MOTOBLUR we are differentiating the Android experience for consumers by delivering a unique mobile device experience designed around the way people interact today,” said Sanjay Jha, Motorola’s co-CEO in a company statement.

It’s well documented that Motorola is basically betting their mobile handset business on Android. They’ll need a hit or two. It’s been a long time coming, considering the RAZR’s shooting star faded long ago. The introduction of CLIQ and MOTOBLUR heats up an already hot competitive smartphone market.