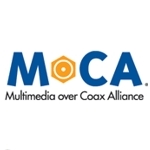 The Multimedia over Coax Alliance (MoCA) yesterday ratified MoCA 2.0, its “next generation” home networking specification. The successor to MoCA 1.1 — already built into cable, satellite and IPTV services delivered over coaxial cable to millions of households — MoCA 2.0 more than doubles the baseline and enhanced mode MAC throughput of its predecessor by delivering 400 Mb/s and 800 Mb/s, respectively, up from 175. PHY rates are 700 Mb/s and 1.4 Gb/s, respectively, and the new specification is backwards compatible with both MoCA 1.1 and 1.0, according to a news release.

The Alliance has also improved on the previous version’s Packet Error Rate, reducing it to one in 100 million, a parameter that is programmable on a “per flow basis and can be assigned depending on the necessity of content.” Average latency less than 3.5 ms across all received packets and traffic profiles assures on-time delivery, according to the group, which counts 55 companies spanning the home entertainment networking value chain as members. It has thus far certified more than 70 products.

Want to really understand MoCA 2.0, its implications and opportunities? Attend the Digital Home Summit, sponsored by MoCA, and co-located at this year’s 2010 FTTH Conference and Expo