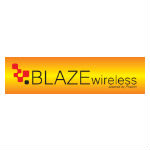 Nebraska-based carrier Blaze Wireless plans to expand its HSPA+ network to include portions of two counties that previously lacked 3G service.  The expansion will be funded, in part, through the Connect America Fund mobility fund.

“The areas that we’re putting sites on are very rural [with] towns of 60 to 100 people,” said Tom Shoemaker, executive vice president for Blaze Wireless, in an interview.

Blaze was one of a few dozen carriers that won a total of $300 million through the mobility fund to bring 3G or 4G to areas along roadways that previously lacked 3G service and where there would not otherwise be a business case for service deployment. Blaze was awarded $585,000 through its parent company Pinpoint Holdings to build or upgrade two towers and install four new radios in two of the eight counties where the company has spectrum licenses.

The company won the funding through a reverse auction, in which funding was awarded to the carrier that could deploy service for the lowest level of support. One other company bid against Blaze, said Shoemaker.

Shoemaker believes Blaze Wireless won the bid because it already had three towers in the area. The company initially deployed a wireless network about 15 years ago but later shut it down.
“We improved one of our existing towers and only had to build one additional tower,” explained Shoemaker.

The portion of the network funded through the Connect America Fund should be operational by first quarter 2014.

Fixed wireless
Blaze Wireless already has an HSPA+ network operational in some other parts of its license area, which includes a total population of about 36,000. In some areas, the company has competition from other carriers, but in others it is the only service provider.

“We sell packages at 2 megabits per second downstream and 1 Mbps upstream,” Shoemaker said. In the future the company anticipates increasing the downstream data rate to 4 Mbps.

Where possible customers install their own premises device, but in some cases the company sends installers to deploy antennas to boost signal strength. Subscribers pay about $45 a month for fixed data service, which is not capped.

Blaze Wireless is one unit of a holding company that also owns an incumbent local exchange carrier that covers much of the same area and a competitive LEC that serves neighboring territories where CenturyLink and Frontier are the incumbents.

To keep costs down Blaze Wireless has been able to leverage previously installed fiber to support remote sectors, thereby minimizing network costs in comparison with deploying full-blown sites.
“With low densities you can get by with remote sectors on a capacity level,” explained Shoemaker.

The company also minimizes its costs by sharing a switch with New Core Wireless.

In the future, Shoemaker said Blaze Wireless is looking at the possibility of deploying LTE using spectrum in which the company previously deployed WiMax.