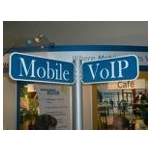 Mobile VoIP poses a threat but also an opportunity for telecom service providers as the technology moves beyond providing a means for users to make cheap international calls, according to “Mobile VoIP–Transforming the Future of Wireless Voice,” a research report released today by In-Stat.

The Scottsdale, Arizona-based research provider forecasts that more than 278 million registered mobile VoIP application users worldwide will generate $32.2 billion in annual revenue by 2013.  Apps that integrate mobile VoIP with social networking sites, MVNOs and 3G providers making up for a lack of legacy voice by using mobile VoIP to add voice to data offerings, and a few others using Unlicensed Mobile Access (UMA) to provide better indoor coverage and off-load macro networks, are among the promising new developments in the mobile VoIP market, according to In-Stat’s report.

“Applications such as Skype and Vonage have influenced users to think of voice as a data application,” according to In-Stat analyst Frank Dickson.  “The increasing penetration of Wi-Fi in mobile devices was the beach head that Mobile VoIP applications needed.  As user habits are being shaped by rich on-line communication experiences, mobile carriers control over devices and data applications is waning.  Mobile carrier attempts to slow the spread of on-line Mobile VoIP are proving challenging as well.”

Looking ahead, In-Stat sees the following among the changes having a positive impact in the mobile VoIP market: