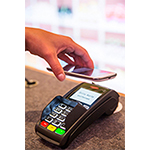 Ovum has issued a bullish mobile proximity payment forecast. The category is the smallest segment of the mobile payments market, but the fastest growing, the research firm notes. The number of people worldwide using near-field communications (NFC) and other mobile proximity technology will mushroom from 44.55 million in 2014 to 1.09 billion by 2019, according to the Ovum forecast. NFC payments will be used by 939.10 million people by that time, researchers said.

Usage is low in developed markets and almost non-existent in emerging markets, but Ovum expects the transaction value of mobile proximity payments will soar from $4.77 billion in 2014 to $141.21 billion globally in 2019, the market research specialist’s Eden Zoller highlights.

Mobile Proximity Payment Forecast
More broadly, Ovum forecasts the global user base across all m-payments market segments will grow from 689.99 million to 4.77 billion over the period. That includes both m-commerce and person-to-person (P2P) mobile money transfers.

“Factors driving growth include wider merchant support for NFC across point-of-sale (POS) acceptance infrastructure, which in the US is being helped by the upgrades to EMV. The adoption of host card emulation (HCE) is also helping, providing a more flexible way of implementing NFC. At the same time, NFC is being championed more widely across the ecosystem by players such as Apple, Google, PayPal, and Samsung,” stated Zoller, Ovum principal analyst for Consumer Services and Payments.

A survey of 4,000 smartphone users by Accenture for its 2015 North America Consumer Digital Payments Survey bears out Ovum’s new market research. While more than half said they were aware of mobile payments, less than 1 in 5 (18%) said they used their mobile phones or other devices at least once a week to pay for goods or services.