Home » Report: Millennial Smartphone Use, 73% Would Give Up Cable TV Before Smartphone 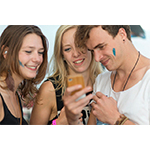 Millennials (those born between 1980 and 2000) are expected to account for 75% of the global workforce by 2025 and millennial smartphone use is of particular interest. Their craving for ubiquitous, ¨always on¨ high-speed network connectivity, along with their usage habits and preferences, has profound implications throughout the economy and society, especially for network service and content providers, according to a new Millennial smartphone survey from CommScope.

“Millennials will represent the lion’s share of purchasing power in a few years, and since they prioritize devices and access to fast internet, they are expected to continue to put high levels of spend towards connectivity. However, they need to be served differently than previous generations in order to meet their expectations,” CTO Morgan Kurk was quoted in a press release announcing the release of CommScope’s ¨How are Millennials shaping the networks of tomorrow?¨

Millennial Smartphone Use
More than 85% of Millennials have smartphones, according to the CommScope Millennial smartphone use survey. Three of four participating in CommScope’s survey of 4,000 Millennials and Baby Boomers living in San Francisco, London, Sao Paolo, and Hong Kong earlier this year agreed they couldn’t go a day without them. That compares to half of Baby Boomers, CommScope highlights.

Furthermore, over three-quarters (77%) ¨agreed¨ or ¨strongly agreed¨ they they expected to be able to stream video, whether they were inside or outside, stationary or on the move. They’re generally willing to pay more for such capabilities as well. Half said they would pay 5% of their annual salary for super-fast Internet service, according to CommScope’s ¨How are Millennials shaping the networks of tomorrow?¨

In sum, 2 of 3 Millennials said social media is the single most important form of social communication for them, according to the CommScope Millennial smartphone survey. That’s double the one-third of Baby Boomers who said so.

Millennials also turn to smartphones and other connected devices for recreation to a much greater degree than Baby Boomers. They spend approximately 4 times as many hours a day on gaming systems as compared to their older counterparts.

All things considered, nearly three-quarters (73%) said they would sooner give up cable TV than their smartphones. Just 42% of Baby Boomers felt the same way.

In fact, Millennials said the three things they couldn’t live without were: Electricity (66%), Internet (56%) and WiFi (44%). Baby Boomers felt similarly: they rated their need for Internet access above that for plumbing (44% vs. 40%) but below that for electricity (71%).

No surprise, CommScope found that Millennials are much more techno-philic than Baby Boomers. One-quarter ¨strongly agreed¨ they like to have the latest tech device as compared to 1 in 9 Boomers.

Given the importance of all these and other findings to network service providers CommScope highlights what it sees as imperatives: