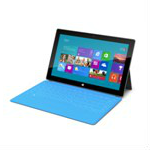 Microsoft yesterday evening announced plans for its new tablet PC dubbed Surface, which heralds several strategic initiatives for the computing giant – including a new relationship with hardware manufacturers, a new take on TV viewing of over-the-top video and a new approach toward combatting the Apple iOS ecosystem.

Full support for Windows 8 is expected to be a critical capability of the Surface Pro, as it will enable the product to support Microsoft Office applications – a capability not found on tablets currently available on the market and one that should appeal to business users. In addition, both Surface products feature keypads that Microsoft claims are easier to use than those of today’s tablets.

Microsoft did not reveal pricing but said it would be “competitive.” Some industry observers guesstimate that the RT will sell for around $500 and the Pro for around $1,000.

The hardware business
This is not the first time Microsoft, best known for software, has ventured into hardware. The company’s Xbox gaming platform has been a substantial success and more recently has mutated into a popular platform for viewing OTT video on a traditional TV.

The new Surface line, however, marks the first time Microsoft has ventured into actual PC – or perhaps more accurately, PC replacement — hardware. Some industry observers view this as a reflection of just how battered the PC industry has been by the Apple ecosystem, which now extends from iPhones to the iPads that have eroded laptop sales.

“The Surface sets a clear standard for HP, Dell, Lenovo, Acer and Asus,” wrote TechCrunch reporter Matt Burns in a blog post. “It shows the rest of the industry the proper way to make a Windows 8 tablet.”

OTT Video
An important capability of the Surface RT is that it has a micro HDMI port to allow users to connect it directly to a big screen monitor without using an Xbox – and Forbes contributor Anthony Wing Kosner sees this having strong appeal to potential cord cutters. Noting that Microsoft has been making streaming deals with Netflix, Hulu and ESPN, Kosner predicts that Microsoft could emerge as a cable alternative, “complete with a portable viewer and a fully featured companion screen/ controller.”

When viewed in combination with a Windows 8 Phone announcement expected later this week, Kosner sees the Surface tablets as one element of a “fully featured alternative multi-device computing ecosystem to Apple’s.”

The Surface apparently can use WiFi for wireless connectivity to computing networks. Microsoft’s announcement does not reveal whether the products will have built-in 3G or 4G connectivity, but it would be surprising to see them come to the market without that capability.