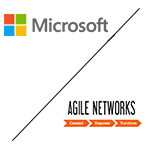 Announcements about Microsoft Airband partners have been coming at a fast pace of late. The latest one involves Agile Networks, a competitive broadband provider that has had considerable success with broadband wireless in Ohio. Microsoft and Agile will partner on a project targeting 110,000 people in rural Ohio who don’t have access to high-speed broadband today.

The Microsoft Airband initiative aims to make broadband available to two million people in rural America by 2022 by working with a variety of service providers.

As with other recent Microsoft Airband projects, the Microsoft Agile project will use TV white spaces technology – a broadband fixed wireless technology that uses vacant TV spectrum in areas where it is not in use by broadcasters.

Agile Networks
Telecompetitor first spoke with Agile Networks back in 2012, when the company was just getting started on building a statewide Ohio network based largely on fixed or nomadic wireless technology with the goal of eventually serving over a million locations, including 100,000 in unserved areas. A key element of the project was support from the public safety community, which planned to use the network the company was building.

Just a couple of years later, Agile Networks’ CEO told us the network was operational in 75 of 88 counties in Ohio.

Microsoft has said that it sees TV white spaces as the best option for providing broadband service to the majority of unserved rural areas, but also has noted that fiber-to-the-home might be an option in more densely populated rural areas. According to Microsoft, the most remote areas would be best served via satellite broadband.

TV white spaces is just one of a range of broadband fixed wireless technologies that has been deployed in rural America. Its chief differentiator is that it can support high speed service even when there is not a clear line of sight between the customer and the access point. While some providers reserve it for customers that lack line of sight, Microsoft sees it being deployed more broadly.

Today’s press release notes that in addition to reaching 110,000 people who are currently unserved, the Microsoft Agile Networks project also will “have an impact” on nearly 800,000 additional people – a comment that suggests service also will be available to people who already have some form of broadband.