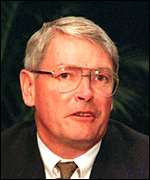 It’s official. John Malone’s company, Liberty Media, has taken a controlling equity stake in DirecTV. The transaction cleared the last remaining regulatory hurdles on Tuesday. It’s quite an interesting twist a fate. Malone has always been identified as a pioneer in the cable business, helping to position it as the competitive power house that it is today. Now, he’s in control of one of the cable industry’s arch nemesis – DirecTV, and he makes no apologies for now putting his legacy industry squarely in his current “cross hairs.” Malone tells BusinessWeek that DirecTV can now “take on cable television as their strongest U.S. competitor.” Truth be told, this is less about competitive positioning and more about making money.

In my opinion, Malone’s end game is not to dig in and battle the cable industry over the long term. Rather, it’s to flip DirecTV and add to his many billions. Malone is gambling that either Verizon or AT&T will come calling, and buy DirecTV outright. Despite all the hype of FiOS and U-verse, both Verizon and AT&T cannot cover their entire footprint with a triple play offering. There’s not enough time or money to accomplish that. The only way to truly cover their entire footprint with a video option and compete with cable at every turn is DBS. After all, the top five telcos in the U.S. all have current partnership deals with either DirecTV or DISH. Some will argue that it’s just a matter of time before the two biggest guys on the block, AT&T and Verizon, decide to take these existing relationships to the next level and acquire their DBS partner. Malone believes that, and he’s betting that it will end up as a handsome payday for him. The only question is how long will it take. Any guesses?

One thought on “Malone Will Flip DirecTV”