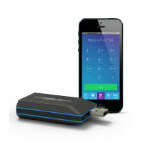 MagicJack VocalTec has launched a mobile over-the-top voice and text offering that lets iOS devices place calls using cellular data or Wi-Fi for $1.99 monthly or $14.99 for a year. To use the offering customers download the company’s magicApp Premium app.

The offering includes a phone number and unlimited local and long distance calling to the U.S., Canada, Puerto Rico and the U.S. Virgin Islands. Text messaging to any U.S. mobile number also is unlimited. Calls and texts do consume some cellular data when used with that service, but the amount of data consumed is relatively small.

The magicApp Premium app has its own keypad and does not use the keypad designed into iOS devices, a magicJack VocalTec spokeswoman said. She added, though, that the app fully integrates with a user’s existing contacts.

MagicJack VocalTec previously launched mobile OTT voice capability as an add-on to the company’s traditional OTT offering. The combined landline and mobile offering uses the company’s magicJackGO device to enable a traditional landline phone to communicate using the customer’s landline broadband connection. The mobile app initially used for that offering was known simply as magicApp and did not support texting. It was available for both iOS and Android devices – and for now Android customers using the magicJackGO landline and mobile offering will need to continue to use the earlier app, while customers using magicJackGO with iOS devices now can get the magicApp Premium app.

A MagicJack VocalTec spokeswoman said there is no release date for an Android version of magicApp Premium as of now.

Those offerings are designed only to work with Wi-Fi, however, limiting where customers can use them. By working with Wi-Fi or mobile data, the MagicJack VocalTec offering should have broader appeal.

Traditional wireless carriers have not yet embraced mobile OTT voice and text capability running over a mobile data connection. But some, including T-Mobile and Sprint, have begun to offer Wi-Fi calling.