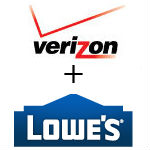 For at least five years, Verizon Wireless and other CDMA operators have been shut out of the business of providing cellular communications for home security systems because North American alarm manufacturers opted to use GSM/GPRS communications when they began supporting cellular digital data communications. But as an announcement today from Verizon and Lowe’s reveals, at least one CDMA security communications device is now available in the U.S.

Lowe’s said it will sell a USB modem designed to work over the Verizon Wireless network for use with the Iris brand home monitoring and control products that Lowe’s has been offering since July. Until now those systems have only been able to use a landline broadband connection. A Verizon Wireless spokesperson said the new USB device communicates over Verizon’s 3G network.

The Lowe’s offerings include a basic security system dubbed Iris Safe & Secure that includes motion and contact sensors, as well as an Iris Comfort & Control home automation offering that includes a remotely controllable thermostat and a smart plug that can control other devices in the home and report on current and historical energy usage. Both systems will retail for $179. In addition, Lowe’s offers an Iris Smart Kit for $299 that combines the capabilities of both of the other systems.

Pricing for the USB modem designed for use with the Verizon 3G network was not disclosed. The Verizon Wireless spokesperson deferred questions about the Lowe’s offering to Lowe’s, which did not respond to an inquiry from Telecompetitor in time for today’s deadline.

Like some other products that have hit the market, the Lowe’s Iris products are not designed to be monitored by a 24-hour central station but instead are designed to send alerts to a customer’s email address or to text or call the customer if, for example, one of the sensors is tripped. Customers also can use this capability to automatically receive an alert, for example, when a child gets home from school.

One of Lowe’s competitors will be Verizon, which has been selling similar offerings in some markets under the name Home Monitoring & Control for more than a year. Unlike the Lowe’s offering, however, Verizon’s systems do not use cellular communications to send out alerts from the system but instead rely on a Verizon landline broadband connection.

In a recent video interview posted on the Telecompetitor site, Verizon Vice President for Strategy and Planning, Consumer and Mass Business Markets Eric Bruno said Verizon may add cellular communications capability to Home Monitoring & Control, as well as support for landline broadband  from other broadband providers in the future.

Verizon charges $10 a month for its service, which relies on a connection to Verizon data centers.  Today’s announcement does not state whether the Lowe’s offering is also data center-based or whether Lowe’s will charge a monthly fee for the cellular-based offering.

With its landline broadband-based offering, Lowe’s offers a basic service for free as well as a paid premium monthly offering. But the company may not be able to offer a free service with the cellular offering because there will be a cost entailed in using the Verizon Wireless network.

Manufacturers of home security equipment initially opted to use GSM/GPRS communications because the components were less costly than those for CDMA. But the alarm industry’s attitude toward CDMA seems to be changing now that AT&T has announced plans to decommission its GSM/GPRS network and T-Mobile has made plans to reduce the amount of spectrum it dedicates to GSM/GPRS.

Lowe’s got back to us today to say that the monthly retail cost of using the Verizon Wireless network for Lowe’s new Iris offerings is $9.99 when used for primary communications and $4.99 if used to back up a landline broadband connection. If a customer also wants the premium monthly monitoring and control option there is an additional charge of $9.99 a month.

The Lowe’s spokesperson also confirmed that Iris is a cloud based system.