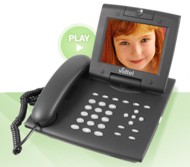 Perhaps one telecom technology promise that has yet to seriously materialize, despite several efforts, is video calling. Every since the Jetson’s cartoon (or maybe before, depending on your perspective), there has been a fascination with video calling, especially over a traditional telephone. But for the most part, the video phone has remained only a cartoon reality. Vidtel hopes to change that. Their new service has gone live and it offers video calling, video voicemail, and regular phone service, all over a wireline telephone set. Customers need a broadband connection and a Vidtel video phone to take advantage of all the features. There are a couple of packages available, starting at $14.95/month. The actual phone costs $199.95. Leading industry analyst Gary Kim offers more details on the new launch in this blog post.

Is the timing right for video calling? Tech savvy consumers have been able to do video chats on a computer for years. But one could argue that it never has really gone mainstream. Perhaps Vidtel’s claim of ease of use will help push it that way. It could end up being yet another reason for consumers to cut traditional wireline telephony service – go with wireless and a video phone. Vidtel’s timing probably isn’t that great though. Video calling looks like a “luxury” to me. In today’s economic climate, luxuries are hard to justify.