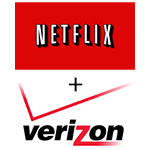 Count Verizon in as the latest service provider to leverage the popularity of Netflix for their own gain. They are featuring Netflix in a new $60 month bundle. It’s quite the interesting relationship, considering the very public spat Verizon and Netflix had regarding the quality of Netflix video streaming across Verizon’s network just six months ago. Variations of this Netflix bundle were tested by Verizon in New York recently.

Verizon Netflix Bundle
The new $60/month bundle features symmetrical 50 Mbps FiOS broadband; local broadcast channels from NBC, ABC, CBS, etc. (up to 17 channels, with 5 in HD); HBO and Showtime subscriptions; and a year membership for the $8.99/month version of Netflix. There are no additional video channels included.

The deal requires a two year contract with a $230 early termination fee, and reverts back to standard pricing in month 25. It does not include equipment costs, which can be significant, including a $12/month fee for an HD DVR set-top-box. Verizon’s terms (as listed online) do not stipulate whether the advertised bundled price includes local retransmission fees, which increasingly show up on customer bills as “below the line” fees. The offer can only be redeemed through an online order.

Unlike some cable MSOs who are also bundling Netflix through TiVo equipment, this Verizon Netflix bundle requires the customer to provide the equipment to stream Netflix to a TV. As of right now, there is no Netflix app on Verizon’s FiOS set-top-box equipment.

It’s yet another example of creative bundling that recognizes the growing number of consumers who are not interested in the traditional 150+ channel line-up, but are interested in fast broadband and some video. While not a crisis yet, cord cutting is real, and service providers are looking for ways to address it. Strategies to address cord cutters and cord neverers (consumers who have never subscribed to a pay-TV service) vary due to the complex nature of these growing customer segments.

With both HBO and Showtime announcing pending direct-to-consumer OTT offers and Netflix’s continued rise, I suspect we’ll see more creative offers from both video and broadband service providers who are attempting to get ahead of this changing video landscape and maximize OTT monetization opportunities.