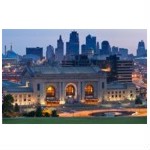 “We’ve been testing the quality of the data collected through our Smart City infrastructure,” explained Kansas City’s Chief Innovation Officer Bob Bennett. “Now we will put it to work to benefit Kansas City residents.”

“The Smart City sensors and digital tools are cool, but understanding how to use these tools – and the data that they generate – bridges the gap between cool and smart,” Kansas City Mayor Sly James pointed out.

Kansas City Smart City
With a projected cost exceeding $15 million, Kansas City launched a public-private Smart City initiative back in May 2016. The initiative is supported by gigabit network infrastructure installed by Google Fiber.

Highlighting the scope and scale of the Smart City Corridor’s real-time Big Data capabilities, the city is providing a map-based visualization that reveals available public parking, traffic flow, pedestrian hotspots and the location of KC Streetcars.

In addition, KC expects to export the Smart City data to its City Open Data Catalog and introduce it via a platform developed by Xaqt. Big Data presentation technology from Xaqt is also being used to display Smart City Corridor data visualizations to the public.

Looking forward, the city expects further data gathering and analysis will yield substantial taxpayer savings by improving the efficiency of repairs and maintenance to city streets, water lines and other public infrastructure, a press release notes.

KC will also be sharing its Smart City data by publishing it during a national workshop it will co-host with Big Think Partners and the the U.S. Dept. of Commerce’s National Institute of Standards and Technology (NIST).