AT&T ranked at the top of the large enterprise and small/medium business segments in the latest J.D. Power business telecommunications satisfaction study.

Verizon ranked second in those ratings and was best among very small businesses in the study, known officially as the 2020 U.S. Business Wireline Satisfaction Study.

AT&T had a satisfaction ranking of 878 among large enterprises on a 1,000-point scale; Verizon was second with 854 and CenturyLink was third at 836. In the small/medium business segment, AT&T’s ranking was 864. Verizon and CenturyLink were second and third, with scores of 835 and 806, respectively. For the very small business segment, Verizon had a 794 score and Comcast Business was second at 757, while AT&T was third at 753.

“Business wireline providers have shown tremendous resiliency by maintaining exceptional customer service despite myriad unanticipated roadblocks presenting themselves as they moved entire call centers to remote work,” said Ian Greenblatt, managing director at J.D. Power, in a prepared statement  about the J.D. Power business telecommunications satisfaction study. “With planned redundancies and excellent and effective service, providers quickly made the seamless transition to ‘safer at home’ without seeing a dip in satisfaction—an impressive feat in these extraordinary times.” 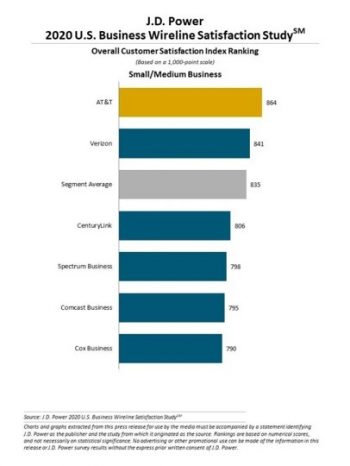 The 2020 U.S. Business Wireline Satisfaction Study is based on responses from 3,652 business customers of data and voice services. The study looks at business wireline experiences across six factors: performance and reliability; cost of service; communications; sales representatives and account executives; billing; and customer service. The study was fielded in April and May.