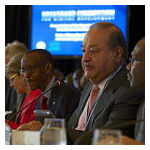 The U.S. ranks 24th worldwide in the percentage of residents who use the Internet, according to the International Telecommunications Union’s 2013 State of Broadband Report, released in New York Saturday at a meeting of the Broadband Commission for Digital Development.  Eighty-one percent of U.S. residents use the Internet, the ITU said.

The nation with the highest percentage of people using the Internet was Iceland, where 97% of the people are Internet users. The top 10 countries all had usage rates above 88% and all but two – New Zealand and Qatar – were in Europe.

The U.S. ranks ninth worldwide measured on mobile broadband penetration, according to the new ITU research. Just under three-quarters (74.7%) of U.S. citizens use mobile broadband, the ITU said. Ahead of the U.S. were several Asian and European countries and Australia.

The ITU’s Broadband Commission promotes policies aimed at increasing the deployment and adoption of broadband services, and the report contains some interesting data to illustrate the positive economic and societal impact that broadband can have.

Highlights of that data include: