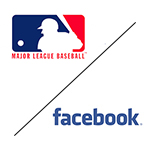 Facebook and Major League Baseball announced a wide-ranging agreement for digital-only broadcasts for the upcoming season.

The two parties said that a 25-game package – one game per week – will be exclusively distributed in the United States on Facebook Watch via the MLB Live show Page. It is MLB’s first digital-only national broadcasts. The games also will be broadcast in most other countries via the show Page.

The deal was unanimously approved by the 30 teams. “This partnership with Facebook reflects the ongoing commitment of Major League Baseball and our Clubs to connect with people around the world,” Tony Petitti, the Deputy Commissioner of Business and Media for Major League Baseball said in an MLB blog post. “It is a major creative step forward in serving our diverse, passionate community of fans, who will enjoy a uniquely interactive experience watching our games on Facebook each week.”

Each afternoon broadcast will include curated content produced by MLB. The first four broadcasts will be the New York Mets versus the Philadelphia Phillies (April 4), Wednesday, April 4; the Milwaukee Brewers versus the St. Louis Cardinals (April 11), the Kansas City Royals versus the Toronto Blue Jays (April 18) and the Arizona Diamondbacks vs. the Phillies (April 26).

A Bloomberg story on the agreement said that insiders put the price for the package at between $30 million and $35 million. It said that Facebook is broadening its sports lineup. Last year, it agreed with Fox Sports to stream the UEFA Champions League and with Univision to broadcast Mexican soccer. It carried 20 non-exclusive MLB games and 47 small conferences college basketball games.

MLB, through its MLB.TV affiliate is no stranger to streaming. Last year, Parks Associates said that MLB.TV had the fourth largest market share of subscription OTT services. It is the top sports-oriented service and is surpassed only by Netflix, Amazon Video (Amazon Prime) and Hulu.