Home » Is the iPhone Coming to Verizon? 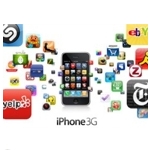 The recent news of Verizon and Google partnering for Android lessens the chance of the iPhone eventually making it to the Verizon Wireless network. Or does it? Verizon and Android are now in bed together – and apparently in a big way. Leveraging Verizon’s 85+ million subscribers may give Android the juice it needs to set up a legitimate rival to the Apple iPhone. You have to think Apple isn’t thrilled at the prospect.

Will they now view Verizon as more of a competitive threat than a potential distribution partner? We have to assume Verizon/Google will do some serious iPhone bashing. They’ve already started bashing AT&T’s 3G Network with their recent ‘there’s a map for that’ campaign.’ Will all of this lead to Apple looking to strengthen their relationship with AT&T, or maybe expand distribution to carriers other than VZW?

Of course the opposite could also be true. Apple may view this development as a reason to accelerate negotiations with Verizon in the hopes of stealing some of Android’s fire. Maybe the Apple iPhone 4G is on the horizon, exclusive to Verizon? Time will tell. Verizon and Google still have to prove this partnership has legs, and consumers are the ultimate judges. It’s popularity, or lack thereof, will play a big role in determining how and if Apple responds, relative to Verizon.