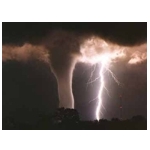 Cable companies have been busy recently. They are moving with some element of precision in building a ‘perfect competitive storm’ of sorts. In so doing,  they are laying the ground work for some tough times ahead for their telco competitors, absent an effective response.

Cable is leading the assault with broadband, and DOCSIS 3.0 (D3) is their current (and future) weapon of choice. Early numbers are impressive. Consider the following evidence of cable’s potential conquest:

While this assault is being led with broadband, there are other elements to this competitive storm as well. Cable companies are enhancing their video offerings, including embracing TV Everywhere initiatives. Comcast’s xfinity is leading the way, but others are doing innovative things as well, including Cablevision’s interesting ‘PC to TV Relay’ experiment. PC to TV Relay allows customers to in effect, build their own channel of personal and web based content, viewable on the TV.

It all adds up to this perfect competitive storm analogy I referred to early on. This storm compels the telcos who haven’t already done so to respond, primarily with FTTH. Good customer service, local presence, and a solid DSL product are very admirable and noble. But these storm clouds may demand much more.

4 thoughts on “Is a Cable Perfect Competitive Storm Forming?”