Home » iPhone 7 Audio and Camera Capabilities Are Its Chief Innovations 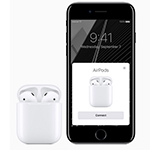 The Apple iPhone 7 and iPhone 7 Plus, announced today and available this month, have a range of new capabilities. But the most impressive capabilities are not related to the products’ role as communications devices but instead pertain to the iPhone 7 audio and camera capabilities, also found on the larger iPhone 7 Plus.

iPhone 7 Audio Capabilities
Both the iPhone 7 and the iPhone 7 Plus come with a new type of ear bud, which the company calls “EarPods,” that connect to the smartphone via the Lightning connector – the jack normally used to connect the charger. According to Apple, the EarPods provide “incredible sound.” But for anyone who wants to use headphones or other devices requiring traditional 3.5 mm analog plugs, Apple is also supplying an adapter. Additionally, Apple plans to launch a wireless iPhone 7 audio alternative called “AirPods” that will retail for $159 and will be available in October.

Rumors about Apple’s audio plans circulated in advance of today’s launch event, with some people questioning the move away from the familiar and widely available 3.5 mm plug and jack.

But at today’s launch event, which was also webcast, Apple Senior Vice President of Worldwide Marketing Philip Schiller defended Apple’s decision. Making the move, he said, took “courage to move on.” He added that “our team has tremendous courage when we have a vision of [how much better] the audio experience can be.”

Apple showed a short video about the AirPods which, according to the video’s narrator, illustrate the company’s belief in “a wireless future where all of your devices intuitively connect.”

The AirPods include sensors and accelerometers that detect when the devices are in the user’s ear, automatically pausing music when they are removed from the ear and restarting music when they are put back in place. Users can access Apple’s voice-controlled assistant Siri by tapping twice on their AirPods. The AirPods also can detect when the user is speaking, automatically enabling beam-forming microphones designed to filter out external noise.

iPhone 7 Plus Has Two Cameras
As for camera advances, both the iPhone 7 and iPhone 7 Plus have 12-megapixel cameras that include optical image stabilization and six-element lenses designed to enable brighter, more detailed photos and videos. The cameras on the new smartphones also have flash capability with four LEDs, providing more light and covering a greater distance than earlier models.

The cameras also feature an Apple-designed Image Signal Processor, which according to Apple, processes over 100 billion operations on a single photo in as little as 25 milliseconds, thereby enhancing photo quality.

“It truly is a supercomputer for photos,” said Schiller.

The iPhone 7 Plus has a capability not included on the iPhone 7 – an additional telephoto camera that works with the traditional wide-angle camera to offer enhanced zoom capabilities. In addition, the dual-camera capability found only on the iPhone 7 Plus supports a new depth-of-field effect that captures subject matter in the foreground in detail, while the background is blurred out. Users enable the capability by selecting a “portrait” mode on the camera.

One might expect consumers to be increasingly unwilling to pay those prices at a time when price wars are waging among wireless carriers. But with its audio and camera advances, Apple may have found a way to continue to command top dollar for the iPhone line.