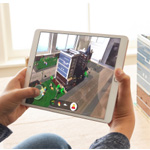 Apple this week announced the newest version of its operating system, iOS 12, which includes augmented reality (AR) capabilities as well as multiple new features. Among the iOS12 new features are faster feature launches, Siri Shortcuts, and management tools to help users lessen their dependency on devices.

The developer preview of iOS 12 is available to Apple Developer Program members at developer.apple.com starting today. The public beta program is expected to be later this month, at beta.apple.com.

iOS12 New Features
Among the new features with the new operating system is Siri Shortcuts, enabling Siri to work with any app, a capability designed to help people accomplish Siri-related activities more quickly.

New AR functionality is expected to come from ARKit 2 and its capability to develop new AR apps. ARKit 2 also includes a new open file format designed in collaboration with Pixar that enables users to have AR capabilities across various iOS app, including Messages, Safari, Mail, Files and News.

Do Not Disturb, Notifications and Screen Time
Apple also introduced device management tools that “[h]elp customers understand and take control of the time they spend interacting with their iOS devices.” New Do Not Disturb features include the ability to dim the screen and block all notifications from showing during ‘Bedtime’ mode for example.

New Screen Time features give users detailed information about how they use their device and the apps present on it. Activity reports can now show the total time spent in individual apps, usage across categories of apps, how many notifications are received and how often an iPhone or an iPad is picked up.  Apple thinks this data will help users better control, and perhaps even lessen, their dependency on devices.