Home » IDC: Wearables Category Will Expand to Include ‘Hearables’ with Close to 200 Million Shipments in 2019 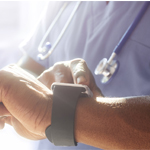 The worldwide market for wearables will grow 15.3% year-over-year and reach 198.5 million units by the end of the year, according to IDC. The market research firm now includes wireless headphones with smart assistants, or “hearbles” in the forecast.

The proliferation of watches, ear-worn devices, wristbands, coupled with support in the healthcare segment, will drive the broad category to 279 million by the end of 2023. The compound annual growth rate (CAGR) will be 8.9%.

“The rise of smart assistants on wearables, both wrist-worn and ear-worn, is a trend worth watching,” Jitesh Ubrani, IDC’s research manager for Mobile Device Trackers, said in a press release. “Though still in its infancy, the integration of these assistants with wearables opens up new use cases, from allowing these devices to tie into the smart home to making the devices more proactive at urging users to live healthier or more productive lives.”

The healthcare sector and enterprise adoption are two major drivers, said Ramon Llamas, the research director for the wearables team in the press release. He laid out the benefits of both. Wearables constantly collect patient data and provide them with the ability to self-monitor. In the enterprise, wearables help employees to communicate and work more efficiently.

IDC breaks the category into five categories: Clothing, earwear, watch, wristband and other and provides shipments and market share for each in 2019 and 2023. It also provides CAGRs for each over the period:

A survey conducted by CSG on IoT usage patterns found that the wearables are the most common user of the technology. Forty-five percent of more than 2,000 consumers between the ages of 10 and 64 in the U.S., U.K. and Asia Pacific use wearables. Digital assistants and smart home devices, at 34% and 23%, respectively, followed.