Home » IDC: Smartphone Shipments Down 6.6% as Consumers Hold on to Smartphones, Maybe in Anticipation of 5G 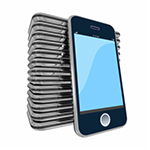 Smartphone shipments dropped 6.6% year over year in the first quarter of 2019, according to a new report from International Data Corporation (IDC). The smartphone shipments drop continues a six-quarter trend, attributed to consumers’ holding onto their phones longer in order to avoid buying a new, pricier model.

Only Huawei had what could be called a good quarter, growing volume and share despite market headwinds.

“It is becoming increasingly clear that Huawei is laser focused on growing its stature in the world of mobile devices, with smartphones being its lead horse,” said Ryan Reith, program vice president with IDC’s Worldwide Mobile Device Trackers, in a prepared statement. “The overall smartphone market continues to be challenged in almost all areas, yet Huawei was able to grow shipments by 50%, not only signifying a clear number two in terms of market share but also closing the gap on the market leader Samsung. This new ranking of Samsung, Huawei, and Apple is very likely what we’ll see when 2019 is all said and done.”

The U.S. market had the worst downturn. Smartphone volumes declined 15% year over year during the quarter as replacement rates continue to slow in one of the world’s largest markets. Apple iPhone had the worst drop, but others that suffered included Samsung, LG and other top vendors.

“The less than stellar first quarter in the United States can be attributed to the continued slowdown we are witnessing at the high end of the market,” said Anthony Scarsella, research manager with IDC’s Worldwide Quarterly Mobile Phone Tracker, in a prepared statement. “Consumers continue to hold on to their phones longer than before as newer higher priced models offer little incentive to shell out top dollar to upgrade. Moreover, the pending arrival of 5G handsets could have consumers waiting until both the networks and devices are ready for prime time in 2020.”