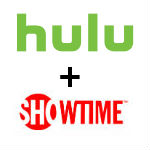 Hulu and Showtime are partnering together to bundle their two services for a new OTT bundle. Subscribers will be able to add Showtime to their Hulu subscription for an additional $9 per month. Both Hulu and Showtime are stepping up their distribution efforts in the face of a dynamic competitive environment for OTT video services.

Hulu Showtime Bundle
Hulu subscribers will be able to add Showtime through the Hulu app and stream Showtime content to a variety of device platforms including iOS, Android, Roku, Apple TV, Xbox, Playstation, Amazon Fire, and a number of others. Hulu currently has approximately 9 million subscribers. The service will become available sometime in mid-July 2015

“We’re excited to be the first premium service available to Hulu’s growing subscriber base and look forward to offering their customers our award-winning original programming, films and documentaries across almost every device,” said Matthew C. Blank, Chairman and CEO, Showtime Networks Inc. in a press release. “Hulu is an important launch partner for SHOWTIME as we continue to expand our service across new platforms and distributors, reaching new consumers wherever a broadband connection is available.”

HBO is Showtime’s most direct competitor, and with HBO Now, HBO is moving full speed ahead into this new OTT distribution model as well.

Hulu and Showtime can leverage each others content and respective subscriber bases to better compete with HBO, Netflix, and others. Hulu charges $8 per month, so a combined Hulu Showtime bundle will be priced at $17, which is only slightly above the $15 HBO charges for HBO Now.

Will CBS Soon Join the Bundle?
Showtime corporate parent CBS also offers an OTT version of broadcast channel CBS, called CBS All Access, which includes the local live CBS feed in numerous (and growing) markets. It wouldn’t be terribly surprising to see CBS join this Hulu Showtime bundle. A CBS-Showtime-Hulu bundle priced at $20 per month may be an enticing offer for aspiring cord cutters.

Of course customers can build these bundles themselves already, but a seamless experience for both content and billing makes things easier and more attractive. I expect we’ll see more of these bundling approaches, as the OTT video arena shapes up to be one of the more interesting competitive environments to watch.