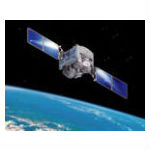 Hughes Network Systems has thought ahead with its latest generation Jupiter satellite, said Hughes Vice President of Corporate Marketing Dr. Arunas Slekys in an interview. The first evidence of the company’s forethought came in the form of an announcement this week that the company had demonstrated the ability to support broadband data at rates of 1 Gbps per channel.

That’s about double what the Jupiter satellite launched last year currently supports — but were the company to someday take the technology beyond the demonstration phase, the additional capacity would most likely be used to support more customers at current data rates rather than the same number of customers at higher data rates, Slekys said. Each individual channel supports numerous subscribers, who currently can obtain service at rates in the range of 10 Mbps to 15 Mbps downstream and 1Mbps or 2 Mbps upstream.

In discussing the 1 Gbps-per-channel demo, Slekys  said “It’s not something that will be translated into  any immediate change in our service offerings.” But he said it should help future-proof the company’s offering.

To support the 1 Gbps capability, Hughes had to upgrade some of its network operations centers and VSAT transceivers – and at present the company has no plans to upgrade that infrastructure throughout the Jupiter satellite’s North American footprint, said Slekys. But if the satellite should become crowded at some point in the future, capacity could be expanded through a broader upgrade of NOC and VSAT infrastructure.

“It gives us more headroom to work with and more flexibility,” Slekys said.

Slekys said Hughes did the 1 Gbps demo at this time because it is looking at further Jupiter satellite launches to support service in other parts of the world and wanted to showcase the full capabilities of its technology.

Satellite broadband could get a boost as the FCC moves ahead with plans to transition today’s voice-focused Universal Service program into a broadband-focused Connect America Fund. The FCC has outlined a plan to use satellite to bring broadband to homes that would be the most costly to serve using landline options.